I’m sharing my process for preparing the keynote talk I’ll be presenting at the 2016 HighEdWeb New England regional conference on March 18. This is Part Six; you can now find an index of all previous posts in this series on my new #ShareHuman page.

Giving a talk in the modern era means 99% of the time also preparing a visual presentation to go along with it. So it should be no surprise that, with only a couple weeks left before this conference, my focus has turned to getting my ideas out into a slide deck to support my thoughts. And this, for me, is really where I get the most stressed and the most intensely absorbed in the process, because these slides are really the final container for everything I’ve worked on. They are the structure and storyboard for the ideas and examples I want to share in my talk, and for anyone who isn’t able to attend my presentation, they may be the only way they get to experience this.

There is a lot I could say about putting together a slide deck, probably enough for another entire blog. I was originally titling this post as “How to Build a Deck” but the small part of me that pays attention to SEO thought that might end up disappointing people looking for details on how to build some kind of wooden platform off the back of their home.

The one thing I will share here that could apply to building slide decks or backyard decks is this: don’t take shortcuts. If you take shortcuts to save time—like say, taking something somebody else made and slapping your stuff on top of it—you may get a deck that meets your needs but it will also be obvious to everyone that you were lazy.

If you think of nothing else when creating a slide deck, remember that the software is just a tool you are using to convey an idea. They should not contain or repeat the idea itself, only reinforce it, enhance it, and make it stick. Seth Godin already wrote about this pretty wonderfully and I recommend reading that (you can also get a PDF version here). END_OF_DOCUMENT_TOKEN_TO_BE_REPLACED

Today is the first day of a new year, but I feel I’m still saying goodbye to the year that just ended. There have been a lot of changes in my world over the past year, and along the way I’ve had to say goodbye to some people who had an influence on my life in one way or another. So before I get too far into a fresh new year, I want to be sure I put out some final words of thanks to those I’ll be missing.

Thankfully, there have been a few I was able to actually thank personally, like the boss who hired me. She was a major anchor in my work life and career. Losing her set me somewhat adrift, but also gives me new freedom to grow and build on my strengths in the year ahead.

Another anchor many of us lost this year was that of Jon Stewart when he left The Daily Show, which seems odd to say because he didn’t die or completely retire, and I didn’t even know him. But like many of his TV audience, I still felt I knew him and I didn’t realize how much I really appreciated him being there throughout my week. It’s going to be a very different election year without him around, but at least there is hope that his sharp, smart, comedic voice will return someday in the future.

Same goes for David Letterman, who officially did retire this past May. Late night TV is definitely different now without him, his voice, his point of view, his connection to the old-school tribe of broadcast TV pros. I’ll understand and be okay if he doesn’t reappear in some way — he’s earned the right to disappear from view just like Johnny before him. But there will always be a small part of me that will hold out hope to see him reemerge, well-rested, full-bearded, and with something worth saying.

Sadly, there are others we lost this year that we won’t be hearing from again, but the work they left behind in our culture will continue to be discovered and influence other humans just as they influenced me with their creativity, their skills, and their dedication to making art, music, films, and even advertising that used those forms in new ways that hadn’t been done before. END_OF_DOCUMENT_TOKEN_TO_BE_REPLACED

The most productive part of the last Wednesday of February may have been the two hours at the end of the afternoon I spent outside of the office with a few first-year students, carving a great white shark out of a pile of snow. 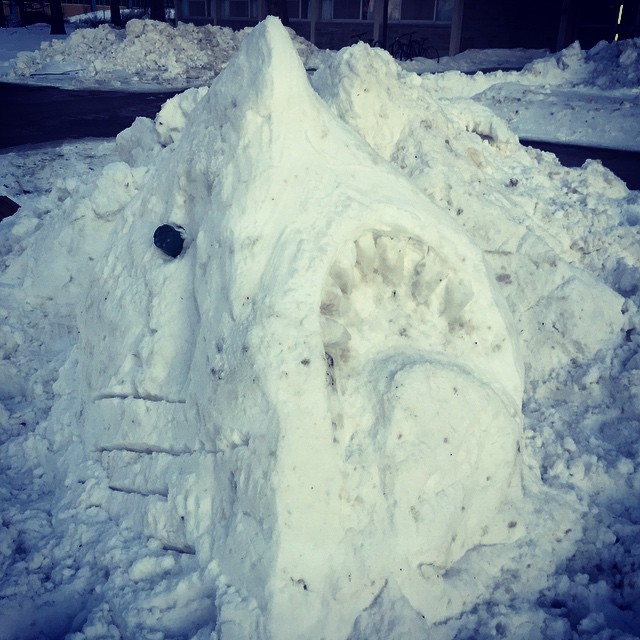 I’ve been working with most of the students involved throughout the academic year as part of the First-Year Residential Experience program at our college. Teamed up with an RA in one particular residence hall, I help create special events and activities about once a month for students, generally around a core-curricular theme of “Inquiry, Innovation, and Imagination.”

This particular day, I was challenging them to bring innovation and imagination to snow sculpting, because we’ve had a couple feet of the stuff lying around campus for weeks. I supplied hot chocolate and hot cider. It was a sunny day, making it feel a lot warmer than the 14 F degrees it probably was.

We had fun. And these students kind of blew my mind. I mean, of all the things I could have expected to see sculpted in the snow by the end of this activity, a great white shark rising up out of the ground would have never occurred to me.